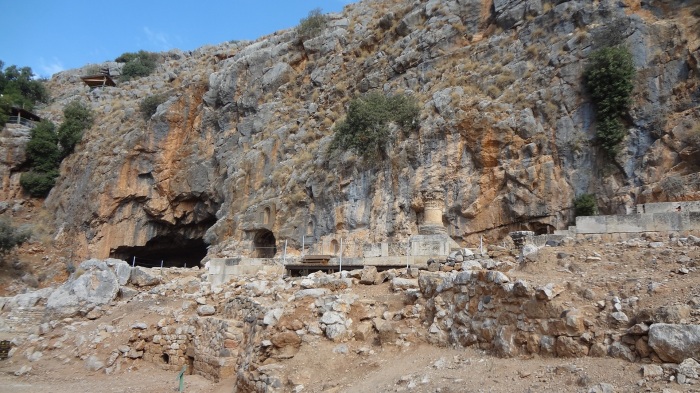 (Photo: Ruins of the Temple of Pan in Caesarea Philippi)

“Now when Jesus came into the district of Caesarea Philippi, he asked his disciples, “Who do people say that the Son of Man is?” And they said, “Some say John the Baptist, others say Elijah, and others Jeremiah or one of the prophets.” He said to them, “But who do you say that I am?” Simon Peter replied, “You are the Christ, the Son of the living God.” And Jesus answered him, “Blessed are you, Simon Bar-Jonah! For flesh and blood has not revealed this to you, but my Father who is in heaven. And I tell you, you are Peter, and on this rock I will build my church, and the gates of hell shall not prevail against it.”   (Matthew 16:13-18, ESV)

It is a lonely place where Christ has gone with his disciples, on the edge of a heathen region, where he can be alone with them. This is the place where, for the first time, he promises them, as his legacy, his eternal church. Not in the midst of the people, not at the visible climax of his ministry, but rather out here far away from the right-thinking scribes and the Pharisees, from the crowds who will sing “Hosanna” to him on Palm Sunday and then on Good Friday shout, “Crucify him,” he speaks to his disciples about the mystery and the future of his church. Evidently he meant that the building of this church could not begin with the scribes, the priests, or the crowds, but it was rather this little group of disciples, his followers, who were called to do it. Evidently he also did not consider Jerusalem, the city of the temple and the center of the people’s life, as the right place for it, but instead he went to a quiet place where he could not hope for his announcement to make waves in any outward, visible way. And finally, he did not consider any great day of celebration as the proper time to speak about his church. Instead, he gave the promise of his church in the face of death, immediately before his first foretelling of his passion. So it is a church of a little flock, a church far out in a quiet place, a church in the face of death, about which we must be speaking here.

-from The Collected Sermons of Dietrich Bonhoeffer, Volume 1, pg. 83